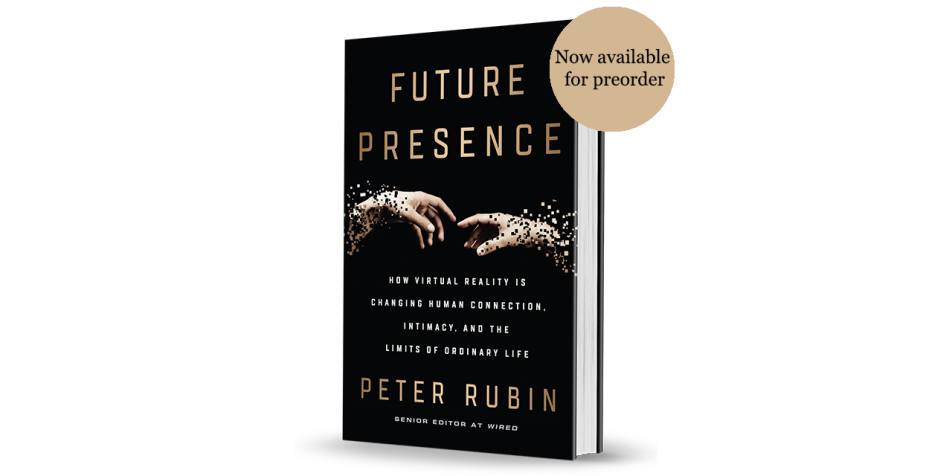 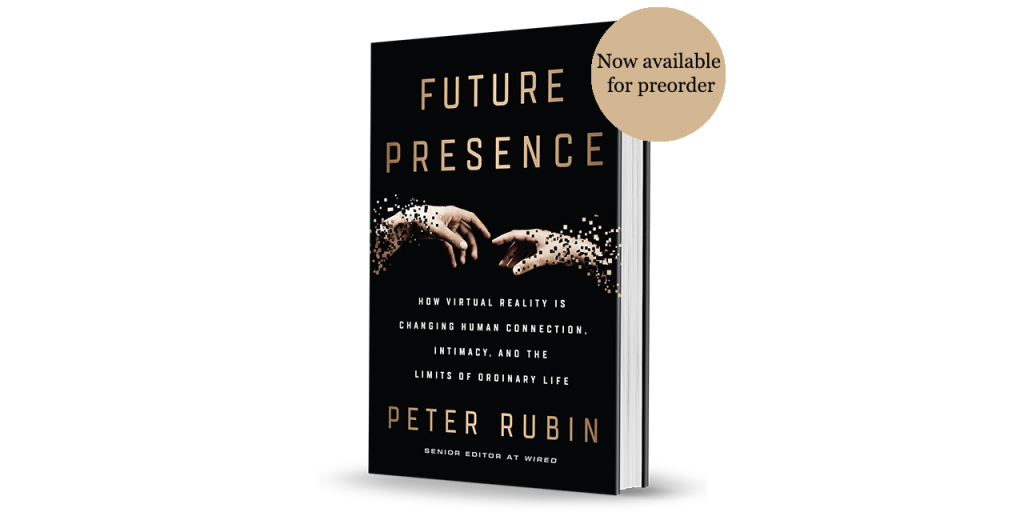 Hi. I have a book coming out. It’s called Future Presence. Maybe you knew this. Maybe you had no idea! Either way, it’s only about three months away, which means it’s no longer A Thing I’m Working On, like it has been for more than a year and a half, and is instead A Thing I Can Hold In My Hands, Despite the Fact That Not All the Photos Are In It Yet. That also means that the book is officially available to pre-order! There are lots of ways to do that, which I’ll get to in a little bit, but first I want to talk a little bit about the book itself.

Future Presence is a book about virtual reality, but it’s not about the history of VR or the technology itself or video games or the schlock-movie classic Lawnmower Man. All those things are in the book (how could they not be?) but they’re not the point. The book is really about VR’s effect on us: what it means for human connection and inhuman connection; how it changes our relationships with ourselves and others; and especially how it intensifies experiences in ways that have profound repercussions for friendship and love and sex, in ways both good and bad. In other words, it’s what VR means for intimacy.

The idea of VR has been around for decades, but after a brief false start in the late ’80s and early ’90s, our computers actually became powerful enough and small enough to deliver quality VR about five years ago. That’s when I began writing about VR, as an editor at WIRED; the very first time I tried it, in 2013, I knew there was something truly special about it. (There’s even video of that first time.)

VR is able to induce a phenomenon known as “presence,” in which your brain truly believes that you’re in the virtual world, and leads your body to react in kind. It’s an entirely new kind of immersion, far beyond anything we’ve been able to experience through theater or books or movies, and it leads your body to react in kind. VR can give you memories of things you’ve never actually done. It can make you think a different person’s body is your own. It can evoke feelings of longing and tenderness—not sympathy, not empathy, but soul-deep connection—with nothing but 1s and 0s.

Since that first day in 2013, I’ve spent a lot of time wearing headsets and exploring mind-bending experiences, seeing things that are far beyond what’s currently available, but also talking with the people who are living VR—making it, learning from it, thinking smart things about it. And perhaps most importantly, I’ve been talking with the people whose lives are being changed by it. Because all of our lives will be changed by it soon enough, in one way or another. Future Presence takes you inside all those stories, to give you a sense of what this technology, and presence, makes possible.

If you’ve never tried VR before, this book might just be the perfect place to start. (Seriously, you don’t need to know the first thing about it.) If you’re familiar with it, but think it’s going to bring about the downfall of humanity, great! I hope the book changes your mind. Even if you use VR all the time, I think there’ll be something new in here for you.

There have been books written about VR before this one, and there will be books written after this one. But I truly believe that Future Presence is doing something that’s not quite like any of these other books. It’s starting with now—with the first few years of affordable, accessible, virtual reality—and charting what the future will look like. I hope you’ll go there with me.

Speaking of which! Like I said, Future Presence is available for pre-order. You can do that here, from the retailer of your choosing, but I’ll make it even easier for you:

And tell your friends. (And your professors, and reading groups, and bosses, and the people sitting next to you on the bus while you read this. Seriously, tell everyone.)